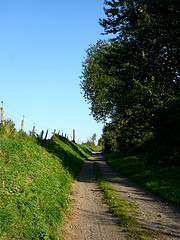 I think I am beginning to realize why it is so difficult for many people–myself included at times–to recognize God at work in the world and in our lives. I just spent the last few days reading the beginning of The Art of the Commonplace: The Agrarian Essays of Wendell Berry. In his essay “A Native Hill” he points out how so many of the structures of our culture do violence to the land upon which we dwell. For example, he notes the difference between paths–the characteristic mode of travel of the American Indian–and the roads that came to be built by the European settlers. While a path is “a sort of ritual of familiarity...a form of contact with a known landscape” that does not plow through but instead folds itself into the contours of that which is already given, a road is “a resistance against the landscape”, showing “not only the necessity for movement, but haste.”

Today I spent at least and hour driving back and forth on an interstate. Even though I am not personally responsible for the creation of this interstate, and the violence that happened to the natural Virginia hills was not the result of my particular choice, the fact that I spend so much time in close contact with asphalt and green highway signs that spill past me at 65 miles per hour cannot be neutral. I move at the pace of a machine, rather than a human or even animal gait. I am traveling upon a resistance rather than an acceptance. A kind of structural non serviam to the natural rather than a fiat to the land as it was and is.

I don’t mean to say that roads cannot bring good–I only mean to point out the fact that we should not spent too much thoughtless time immersed in the structures of our culture without being mindful of their effect on our souls. I read once that the Amish reason for being against much of modern technology is not because of the intrinsic evil of progress, but because they believe that it will cause the disintegration of the family. The leaders of their communities evaluate each new measure of technological “progress” in terms of how it will affect the family and decide whether to permit it or avoid it. The book mentioned as an example central heating–the Amish felt that if all the rooms of a house were heated, rather than just the one large central room heated by a wood stove, a family would be driven to all corners of the house and spend less quality time together. Something I continue to give thought to, particularly when I feel more like Martha than Mary, unable to give myself over to the “one thing” that is necessary in this life.
Posted by Carla at 1:10 PM