Of squirrels and snacks 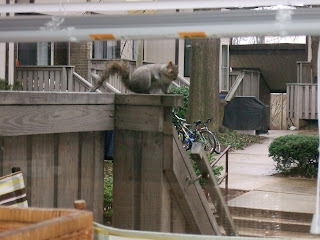 If you happen over our way any time in the near future and see squirrels lying scattered about the courtyard with bloated stomachs and a look of dazed satisfaction in their little beady eyes, it's our fault. Yesterday we provided the fixings for a scavenger's feast: a whole bag of Buttered Caramel Toffee and Almond Popcorn, open on our porch. I think we were hoping to get rid of it in a more...um...environmentally friendy way than sending to the landfill in a plastic bag. And maybe we were curious to see just exactly what the neighborhood squirrels would do after having to pick at the meager remains of our neighbor's birdfeeder for most of the winter. Well, the squirrels disposed of the whole bag in less than 12 hours, and this morning we awoke to find them cleaning up the last crumbs off the porch and munching them down as though they hadn't just eaten half a pound of the stuff already. Not much later I was sitting on the couch nursing Gabriel before church when another squirrel bounced onto the porch, sniffed around, then jumped to the windowsill and stood on its hind legs, with front paws up against the window. He just stared at me. I think he was silently pleading for more. More popcorn, that is-- I tried Soy and Flaxseed Cluster Cereal from Trader Joe's, which I couldn't stand, but it sat untouched on the railing of the porch for a week until the rain washed it away. Guess the squirrels have a soft spot for junk food too.
Posted by Carla at 1:43 PM