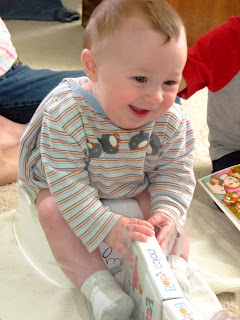 During my first pregnancy, I joked, I laughed, and I made fun. I had heard some talk about mothers and fathers who were so vigilant about their baby's elimination patterns that they would dangle them bare-bottomed over a potty when baby needed to relieve himself, rather than using a diaper. "Elimination communication" or E.C. it was called, and it just sounded so outlandish I couldn't even contemplate it. But then I think I inadvertently ended up doing it with Gabriel. He was 8 mos old, he was an extremely regular diaper-filler, and I decided I was tired of cleaning poopy cloth diapers. So we sat happily on his little potty chair looking at books and toys. Somewhere along the way I had glanced at a website about E.C., so whenever I sat him on the potty I also made the ASL motion for "toilet" and gave him a cue sound (a little grunt, to mimic what he usually did while going #2), hoping that someday he would associate the urge to relieve himself with that sound & sign and be able to tell me before he went. By the time he was about a year old I'm pretty sure he was running to me whenever he needed to go #2, although he never really did the sign. I could just tell by the look on his face. I don't think I cleaned a poopy diaper after about the time he was a 16 months old, although he could have been a bit older. I put him in thick training pants just before he was 2, and he seemed fine with us just going periodically to the bathroom so they didn't get wet. He is 2.5 now, and in the last couple months he's gotten pretty independent about going on his own, both #1 and #2. 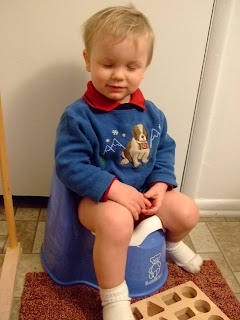 With Gabriel I hadn't really read anything about toilet training...we just sort of did what seemed fun and natural and it wasn't until friends talked about it that I realized that normally one doesn't start doing this sort of thing until much later, when a child seems "ready". I am quite glad I didn't wait until later, because Gabriel has developed into the strong-personality type A toddler that would probably still be insisting on wearing diapers because that's what he is used to.

So now the big experiment is to see if the process that we went through with Gabriel will work for Peter, or what we did wasn't really that important and Gabriel just had a quirky love of using the potty at an early age. For now, I prop 5 mos old Peter on the potty and sit with him after his "wake up nurse" in the morning and after naps. We've saved a couple diapers so far, and he seems to like sitting on the potty because it actually helps him balance to play with his toys and laugh at himself in the wall mirror, instead of rolling forward onto the floor, which is what happens if I just sit him on the floor on his own. I've also been feeling a little bit disconnected from him because of all the focusing I've been doing on books and activities with Gabriel, and the potty time has provided the perfect "special time" for little Peter.

I'm sure everyone is as excited as I am about my children's "elimination story" (ha ha) so I will provide updates and anecdotes as appropriate, and field questions should they arise. :)
Posted by Carla at 3:15 PM