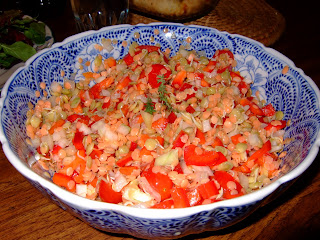 One of my recent resolutions has been to incorporate more traditional, varied, and nutritious foods in our family's diet. Sprouts, anyone? :) Apparently germinating seeds, nuts, and grains turns them into nutritional powerhouses, and it's pretty exciting for a two-year-old too!

We chose lentils as our first sprouting experiment. It was actually pretty simple. (Gabriel saw the red ones in the Whole Foods bulk bins and asked if we could try them, hence the red and green combo.) 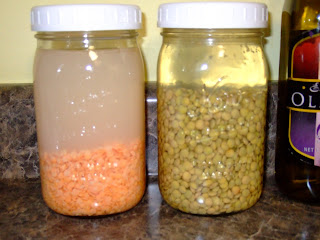 Here's a quick story about how it went. If you want more in-depth info, check out Sproutpeople, the folks we got our sprouting lids from.

First, we obtained our equipment: mason jars for about $1.25 at Michael's and the lids from the abovementioned site.

Next, the lentils were soaked overnight to jump-start them out of their dormancy. 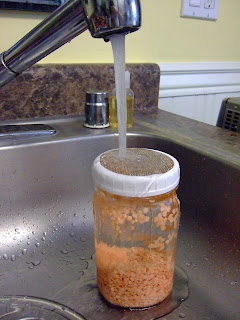 Second, I rinsed long and well, especially those red guys. They were very starchy and the starch inhibits the sprouting. 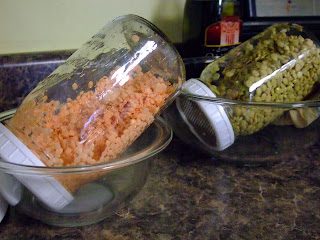 Then I drained, long and well. (8-12 hours). I repeated rinsing and draining until the sprouts were about 2.5 days old. The most important thing was to make sure there was enough air circulating in the jars, I think so they didn't get moldy or suffocate. 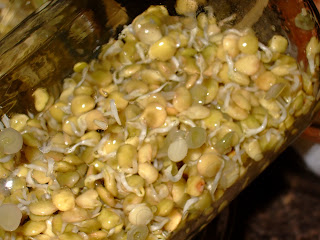 By about day 2.5, this is how the green lentils looked. Exciting, no? Raw they tasted a bit like an uncooked bean sprout. As well they should, because lentils are beans. :)

Finally, I steamed a mixture of the red and green lentils to use in the recipe below, an invention of my own.


Sprouted Lentil Salad
2 cups sprouted lentils (or other beans)
1 red pepper
1/2 Vidalia onion
1/2 cup cherry tomatoes, halved
Homemade red wine vinaigrette (to your own
taste)
Toss everything together, and serve on top of greens, if desired. I think I actually prefer it on its own, though. And yes, for those of you who are wondering, Gabriel did eat it. And he even said "yum". Although that might have had something to do with the fact that he got to pour his own dressing on top of the two tablespoons of sprout salad he had, and he poured about a tablespoon of dressing on. Not sure he could taste anything through the vinegar, but at least he ate it!