10 Questions to Encourage Engaged Parenting in 2010 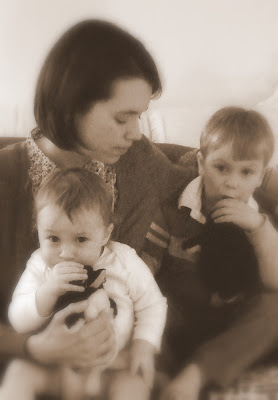 A great set of questions from Simplemom.net, worth pondering on a rainy New Year's Eve when I'm stuck at home sick, listening to the pathetic wheezing of my 1 year old and the coughing of my three year old. Here's my run-down. Anyone else?

Parenting Personality
1. How do you think your children have experienced you as a parent in 2009?
I’ve been something of a roller-coaster parent, I think. There have been high points of patience and new understanding, as I’ve begun to decipher my three-year old’s temperament, but there’s been low points of anger, short-temperedness, and annoyance. I think this year has been a jumble, with a lot of changes in our home (two moves) and a lot of changes in our lives (a baby who went from a little sleepy bundle to a walking almost-talking, almost-toddler), and my parenting is jumbled as well.

2. How do you want your children to experience you as a parent in 2010?

If Gabriel-and-Peter-as-adults could remember me in 2010, I would hope they would describe me as:
Hit the Highlights
3. What aspects of parenting brought you the most joy in 2009?
Making time to be in nature with the boys during the week, and spending our free family time hiking or camping.

4. What are you looking forward to with great anticipation in 2010?
I don’t really have anything in mind... maybe this means we need to make some fun summer plans to look forward to.

Strengths and Challenges
5. As you survey your parenting toolbox, which tools do find to be working well for your family, and which tools could use some sharpening?
Sometimes I feel like nothing is working well with Gabriel, my three year old. He takes so much energy, it is like I can only do a good job with him when I am 100% rested, 100% present, 100% on top of my game. However, there has been a very important thing that has helped me more than anything else: make a connection before giving a direction. This idea--from Hold on to Your Kids-- is so good for Gabriel. If I call down the stairs "It's lunch time, come up and wash your hands" while he is playing in the basement, he will literally scream because he is so flustered at being interrupted in whatever he is doing. If I walk down the stairs, play with him for as little as 30 seconds, admire his work, whatever-- and then say that it is time for lunch, usually he will cheerfully bound up the stairs. The latter scenario takes more effort, and sometimes I stubbornly don't do it, thinking "he should just obey me." This usually has an effect of spiralling awfulness-- screams from Gabriel, more commands from me... the connection is really worth it.

That being said, I think the tool that needs most sharpening is the spousal help-tool. I think Michael and I need to talk more about how to approach parenting. We can learn a lot from one another, it's just a question of sitting down and talking about our parenting in an intentional way.

Building Connections
6. How have you pursued your children in the past year?
After hearing somewhere that the human psyche needs 5 affirmations for ever criticism made, I've tried hard to affirm Gabriel. In particular, the last moment before he goes to bed, I try to make a point of telling him something positive-- that he did a good job with his brother in a particular situation, or that I had a really good time baking bread with him, etc. Usually this evokes an incredibly positive response. A big smile, an "I had a good time doing that with you too, Mommy," and a hug. I hope that's what he drifts off to sleep thinking about, rather than the tears or the hard moments.

7. What actions will you take to be more engaged with your child in 2010?
I think both Gabriel and Peter need "special Mommy time" and "special Daddy time." When we have the chance to be one-on-one with them, I want to make the most of it, and intentionally do a special activity with them, rather than just trying to get more things done because there's one less child in the picture.

Mending Missteps
8. Is there any aspect of your relationship with your child that has been strained by unforgiveness or regret?
There are so many things that I regret about the last year, so many ways I wish I had done better, so many times I wish I had been more patient, more creative, more understanding. If there's one thing that's beautiful about Gabriel, he is very seemingly very forgiving. I know he's not quite at the stage where he can comprehend what that even means, but he doesn't seem to be one who holds grudges. It's more a question of me needing to forgive myself.

9. Is there an unresolved issue for which you need to offer your child forgiveness, or do you need to ask for forgiveness from your child?
Even though he's only three, there have been times when I have been so unreasonably impatient and short-tempered I have apologized to Gabriel. I think I need to just forgive him for being himself sometimes... he just lives life at a high-octane and sometimes I start to wish he were different. That's certainly not productive, and it doesn't take into account the fact that someday (please God) these difficult-to-handle bursts of energy and willfulness will be used for productive purposes!

10. What actions will you take to nurture a healthy connection with your children in 2010?
I think the number one thing I would like to do is focus on quality time at home. We can be so busy during the week--groceries, playdates, errands, library, Atrium, playschool--that our home time can be so filled with cleaning and tidying and moving on to the next outing. I want to have the time and space at home (or outdoors near home) to do quality activities with the boys.
Posted by Carla at 7:38 PM 1 comment: 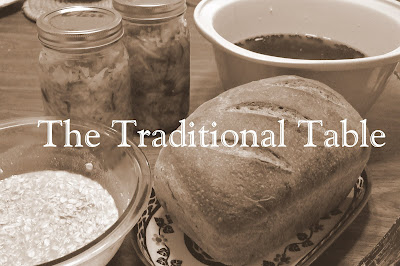 *The fascinating findings of Dr. Weston A. Price, a dentist who travelled all over the world and observed the eating habits of populations that had been isolated from industrial civilization are well-chronicled elsewhere. The short version is this: he observed diverse populations– from the Inuit in Alaska to isolated mountain-dwelling Swiss villagers to Afrikan tribes– and found that their health, not only dental but all-around, was excellent. He compared these isolated peoples to members of the same racial/cultural groups who had begun to eat the foods of industry– white flour, white sugar, white rice, concentrated fruit juices, among many things–and saw the industrial eaters suffering from a great many more health problems as well as physical and mental debilities. Although we have joined the Weston A. Price Foundation– a group that encourages traditional eating and publishes an interesting a quarterly journal on the subject– I must make a caveat here that I do not wholeheartedly endorse everything this group says and does, for reasons I am feeling out slowly and will discuss here as time goes on.
Posted by Carla at 7:42 PM No comments:

You know you're a Catholic family when...

... your son, upon examining the first Pez dispenser he has ever seen, says:

"Mommy, it's opening up its mouth to receive Communion! Can this guy eat the Body of Christ too?"
Posted by Carla at 10:53 PM No comments: