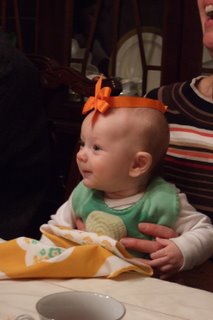 I missed posting at Thanksgiving... so here’s a silly photo of my little boy with a ribbon from a box of chocolates on his head. :) Great for those embarrassing photo collages in high school, hm?

The blog’s been silent for the past couple weeks due to a string of recent baby events. Gabriel’s an early teether, which means for the past month he’s been a veritable fountain of drool and has needed bib changes practically every ten minutes. After a week of teething, he caught his first cold of the season, which led to a fever and some long-lasting sniffles whose only benefit is the fact that I can hear Gabriel breathing down the hall so I don’t need to peek in on the sleeping baby to “make sure he’s still breathing” as often! Now that he’s getting over his cold, we’re working on a new project following suggestions from Elizabeth Pantley’s No-Cry Sleep Solution. Our little “project” involves making sure baby takes at least three naps a day, that we have a “routine” for every day and for before bedtime, and that he learns to fall asleep once he’s in his bed. The whole goal is to get the little one to sleep a bit longer through the night. It’s been difficult at first...some days Gabriel has refused to go to sleep for two hours! But I think it’s working, or Gabriel is just changing on his own. Last night he slept from 8 to midnight, and then from midnight to 4am, which was really good for him. I’ll let you know when he goes a full five hours, which is supposedly the definition of “sleeping through the night”!

And it begins...Gabriel’s new thing this week has been grabbing things and putting them in his mouth–anything from cloth napkins to books. Watch out world...here he comes!
Posted by Carla at 11:39 AM

What a precious baby boy! I wish I was better at keeping in touch so that I didn't just wait for blog updates... I will try to get better and you guys are in my prayers!