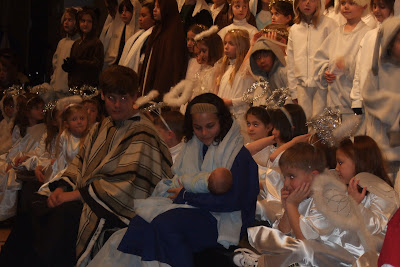 After many protests on my part, Peter made his debut on the big stage on Thursday night in the Christmas pageant at the school where Michael works. Yes, he was "Baby Jesus"! I had my doubts--picturing hordes of winter-germ-laden kindergarteners petting Peter on the head, or a crying Peter bound to a manger of straw for a half hour. But after much encouragement from Michael, I reluctantly agreed. It all turned out okay in the end--Peter cried for half of his part--which was only about five minutes at the end of the show anyway. Then he settled down and seemed to be making happy faces at "Mary" for the second half--he must have been doing something cute because the young girl who played Mary was smiling down at him--genuinely. At that point I was glad I had finally agreed despite all of my "mommy fears." It seemed like a powerful "pro-life" moment, if only for the girl who had the opportunity to hold him in her arms and marvel at the beauty of his littleness and newness.

I've often thought about the pro-life movement as I have been pregnant and mothering in the past two years. I have never been very active in this movement in the expected ways, but I have often hoped that my presence and witness as a mother play some small part in advancing the respect for unborn life in our country/world. And so I try to be somewhat put together for the day, rather than in sweats and sneakers, even if "all I do" is stay home or pop into the library. I try to have a positive, joyful attitude when I address my children in public, and avoid negative comments about them in the casual conversation I have with the person in the grocery store check-out line. Recently all this has been harder, what with the challenges of being a mother to two, and the challenges of Gabriel's two-year-old-ness. I will continue to try, however, because I know how powerful and encouraging it has been for me when I have been having tough times as a mother to see other moms exhibit cheerfulness, creativity, and joy with their children...often in small, simple ways that they probably don't even realize I notice.
Posted by Carla at 8:11 PM

Precious Peter!! That is adorable, I'm so glad he was Baby Jesus :)