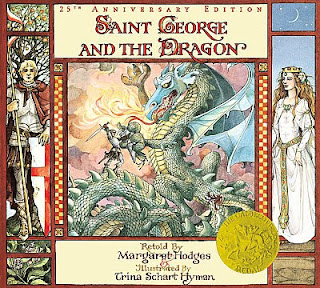 Truth be told, I had been trying to avoid the knightly stories and legends until later. At the tender age of 3.5, I doubted that Gabriel could discern the difference between inappropriate and uncalled-for violence and force used in honorable defense of a just cause. Plus, I just didn’t want to fuel the mischievous fire of using sticks, poles, brooms, or any other as long pointed objects as tools for recreational poking of younger brothers.

But Gabriel kept coming upon knights anyway– a plastic castle play set, and exhibit of armor in the National Gallery, books he found on his own in the library– and I think he was getting the idea that they were just plain “bad” because every time he played knight (which entailed poking people or things inappropriately) I curtailed or redirected his fun. And he kept playing knight anyway. So, rather than have him play “bad” knight, I thought it better to fuel his imagination with some “good” knight stories.

So I caved and during “G” week we talked about St. George (a possibly mythological Catholic saint, but useful for teaching purposes nonetheless), and read this beautiful, Caldecott-medal winning picture book that dwells in the realm of myth most certainly. Written by Margaret Hodges and illustrated by Trina Schart Hyman, it is a retelling of a portion of Edmund Spenser’s Faerie Queene (about which I know quite little other than what is in this book).

Not only did Gabriel love this book, it was beautifully written, with rich, descriptive language and illustrations that could serve as practically a full semester’s study in floral botany for an older child. Although the language was on first glance a bit above Gabriel's level, I try to read a bit above his comprehension level because I think he rises to the occasion. Plus, I've noticed him using similes and metaphors in his own speech and I think it is thanks to us reading books that are a bit more "advanced." This book had a similar aura of magic and allegorical possibilities that I appreciate so much in C.S. Lewis’ Narnia. George is led to the battle with the dragon by a princess named Una, who to me had slightly Marian overtones...

Now the travelers rode together, through wild woods and wildness, perils and dangers, to Una’s kingdom. The path they had to follow was straight and narrow, but not easy to see. Sometimes the Red Cross Knight [George] rode to far ahead of Una and lost his way. Then she had to find him and guide him back to the path. So they journeyed on. With Una by his side fair and faithful, no monster or giant could stand before the knight’s bright sword.

The battle between St. George and the dragon is a bit grisly– do read the book ahead of time if you’re not sure about age-appropriateness of dragon’s tails gushing a bit of blood and a slightly wounded St. George lying almost-defeated before the last day of his battle). Although the battle is kind of intense, it leads to a Baptism-like moment when a near-to-death St. George falls into an “ancient spring of silvery water” that heals him, such that he is able to rise with the sun to face the dragon again the next morning.

I hesitated to introduce this book to Gabriel–it’s kind of a confusing mix of fairytale, myth, true virtue, and the concept of sainthood–but this book deservedly captivated his imagination and enabled me to talk to him a bit about bravery and. The Loyola Kids Book of Saints has a great take on St. George– mythological or not, the story teaches us that with Christ we can bravely fight against the dragons in our lives–whether they be or problematic habits or behaviors of our own or evil that comes from outside. Less profound but still useful in our house was the fact that I can now say “Did St. George use his sword on the nice townspeople or against the mean dragon? Your brother is not a mean dragon...” ...and it's been (mostly) effective so far.

For some more lighthearted, not quite so advanced knight books, focusing on the “good knight” idea, try the Good Knight series and the Sir Small series. Neither are particularly beautiful nor profound, but for a little guy who's into knights, they help drive home the idea that knights can be honorable and good, and they are slightly humorous if read in with an attempted British accent.
Posted by Carla at 9:49 PM