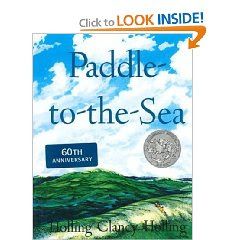 “Hmmf. Good book,” remarked the bearded, not-all-that-friendly-looking, middle-aged librarian as I checked out this book with its companion 70's-produced DVD. It’s not all that often that even the chatty, friendly, lady-librarians remark on my book choices, so when our silent male librarian behind the checkout desk shared his approval of Paddle-to-the-Sea, I had an inkling that this was a good boy-book. I discovered it by chance, by typing the word “creek” into my library system’s card catalog. We read it back in the fall, during “C” week, when we were investigating creeks and ponds. Paddle-to-the-Sea is a small wooden Indian carved one winter by a Native American Indian boy in the snowy mountains of Canada. The boy sets him on the edge of a snowbank to wait for spring, and when the snow melts into the creeks, Paddle begins his journey. He makes his way to the sea by way of rivers, the Great Lakes, and the helping hands of some friends he meets along the way, including fishermen, children, and lighthouse keeper.

The illustrations are vivid and detailed–I think this is why the book engaged my son even though it had a full page of text for each vignette of Paddle’s journey. He was fascinated (of course) by the forest fire scenes, as well as the depictions of the industries and pasttimes one encounters along the river and lakes (logging, fishing, the Coast Guard, lighthouse keeping, etc.) The book puts flesh and bones to geography and natural science with maps of Paddle’s journey, as well as explanations of how water travels to the sea, and beautiful pictures of the various ecosystems he encountered. The characters Paddle meets along the way, and their jobs would make a great mini-unit on Canadian and North-Eastern American social studies.

As I mentioned, there is a short film based on the movie, which can be found in DVD form. We enjoyed it, although it was definitely a get-it-at-the-library kind of thing, not something I would say was so great that we’d want to purchase it. That being said, it seems as though Paddle has something of a cult-following (in the lightest meaning of the term), given that there are...yes... facebook groups dedicated to him. Guess I found a good one, eh? :)

* * *
Also on my grown-up bookshelf this weekend:

Fire Within:St Theresa of Avila and St. John of the Cross by Thomas Dubay... I've only read the intro so I'll have to save any detailed thoughts on it for later.
Posted by Carla at 9:40 PM