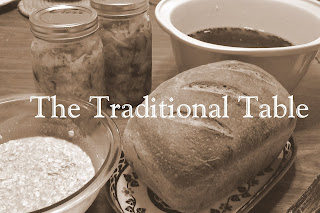 As I mentioned in my first post on our journey to becoming more “traditional” eaters, we would like most, if not all, of the foods that we purchase to be foods that mankind has been eating for thousands of years. This means eliminating from our cabinets packaged foods such as cereals, crackers, boxed cookies, frozen premade dinners, and highly processed breads.

Now, I grant that there are some delicious breads out there, from good bakeries, made with only fresh, traditional ingredients. I don’t even allow myself to browse at the Whole Foods Bakery, primarily because at $5-$8 a loaf, their breads just aren’t in our normal-everyday budget range, but also because I would probably drool on the cases and I know Peter and Gabriel would be begging to have some bread since they love the stuff!

At home, I can make my own bread with all organic ingredients and eat it fresh out of the oven for about $0.89, if I make my standby Whole Wheat Sourdough. My sourdough starter has been disappointing me lately, so at Michael’s request, I tweaked a 100% Whole Wheat bread recipe with conventional yeast, soaking the grains overnight to reduce their phytate content (what in the world is this, you ask? Read here or here to find out) and also to make mouth-wateringly fluffy bread and rolls.

The new conventional yeast recipe I’ve recently discovered, based pretty closely on a recipe from an awesome used-bookstore treasure, Cooking with Whole Grains by Ellen and Vrest Orton, costs me about $2.00. Again, I use all organic ingredients, but instead of water I use milk, butter, and honey, so that adds to the cost. However, a great frugal tip-- you can use milk that's past its prime for this loaf--yes, sour milk-- and honestly I think it tastes even better!

I have to tip my hat to my mother who facilitated my discovery of this great cookbook which has tons of old-fashioned, all 100% whole grain recipes! She passed along this fascinating article called The Mystery of the Mill, which is the introduction to the cookbook I referred to above. Anyone interested in the history of food and the industrial food system will be interested in reading this history of how white flour, although less nutritious, became the predominant flour of our American food system. (It’s all about the money, folks. Are we surprised?)


Here’s the recipe from Cooking With Wholegrains with my modifications:
Soaked Wholewheat Bread

Pour over:
1 ½ cups warmed (but not boiled) milk
Stir until butter and honey are melted.
Add:
½ cup buttermilk or yogurt
5 ½ cups flour

Stir until well mixed. Let stand covered in a warm place until you are ready to start the rising process. I usually do this step ( the “soaking” step) the night before, and start my rising process in the morning.

Mix together and allow to proof:
2 1/4 tsp commercial yeast
1/4 cup warm water
1 tsp sugar or honey Mix this into your bread. (I used the bread hook on my Kitchen Aid with much success.)
Once it’s mostly incorporated, mix in:
2 tsp salt

Knead it for a bit, then set in a well-oiled, covered bowl to double in bulk. You’ll be allowing this doubling four times. Once it’s doubled–about an hour, but sometimes a bit more the first time–punch down the dough, and fold the dough from the sides to the center until it is about turned over, and let rise until doubled again. After the fourth time, turn the dough out onto a floured board and knead for a minute or so until it seems firm. Cut off about a third of it, leaving about 2 lbs. of dough for a loaf and about 14 oz. of dough for a couple dinner rolls. Alternately, you could make 2 loaves. After cutting the dough knead it a minute or so more, shape, and place in your bead pan. Let rise in the pan until about doubled–don’t let it over-rise, so keep a close eye on it, then place in a pre-heated oven at 425 for 15 minutes, then lower to 375 and bake for 20 minutes longer, maybe 45 minutes in all. You may need to "tent" the bread with some foil to keep the top from browning too much.
Posted by Carla at 8:52 PM

Anonymous said...
This comment has been removed by a blog administrator.
2:54 AM